← more from
Monika Enterprise
Get fresh music recommendations delivered to your inbox every Friday.
We've updated our Terms of Use. You can review the changes here. 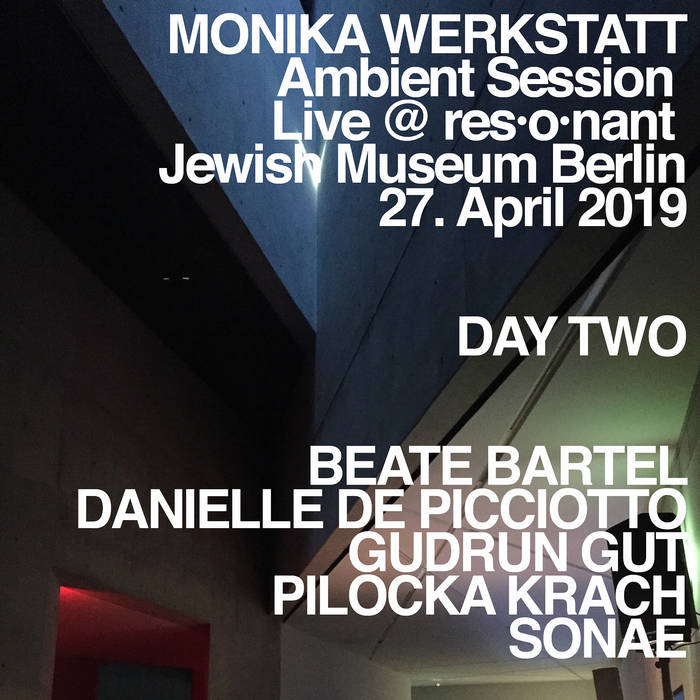 On 26 and 27 April 2019 at The Jewish Museum in Berlin Monika Werkstatt performed its Ambient Werkstatt in various constellations inside res·o·nant—a walk-through light and sound installation by the Düsseldorf conceptual artist Mischa Kuball situated in two of the famous Voids of the Libeskind building. For this specific edition Monika Werkstatt activated the joined forces of Beate Bartel, Danielle de Picciotto, Gudrun Gut, Islaja, Pilocka Krach, and Sonae. The Fab Five of Silicon-meets-Analog-Machine-Music set out to invite listeners to join them on a two-day, four hours-each expedition into the yet unknown, improvising with sounds and configurations while structuring the longue durée in sustainable packages by adding and subtracting members to the flow.
When you entered the space you were immediately transfixed by the ingenious set-up. Instead of black-boxing the laboratory’s machine-park Monika Werkstatt had designed this Kraftwerk in a half-circle with screens and keyboards and all facing the audience. Meaning the musicians turned their back to us but being lit by machines and having no stage whatsoever there where multiple 20th century fire-places red-blue-yellow-green-light-dioding and inviting everybody to come closer, to join, to see, to learn, giving the idea of DIY a totally new meaning. If one wanted, one could read the potential instruction manuals for all the magic that unfolded live and in real-time. There was networking at the highest level without any safety-nets, which created, at least in this listener an instantaneous feeling of bliss and thankfulness for being able to delve into this generous offer to participate in the making of. To feel embraced by the warmth of bleep-blubbering lava-streams of sounds and voices, violins and found phone-noises that were so everyday and extraterrestrial at the same time. Not that some of the lava wasn’t nicely packaged in perfect ice-cubes slowly melting in front of your ears while you were watching whole families deep-diving into the flow of all things acoustically possible. Thank God one thought, that some of this will be captured in a NTS Radio stream so that one could hope for recapturing some of the many moments that passed by the inner emotional landscape. That stream is still available by the way.
But today, more than a year after the fact and the exhibition, what you are listening to here and now is yet another sonification of pasts that are ever-present. And this new realization of possibilities has distilled even more magic out of the mix. It almost seems as if it amplifies and focuses all that is stored in your back-end and I would be anxious to learn what it sounds like to somebody who was not there. Is my memory playing tricks on me as in: could it possibly have been THAT good? Well, sure sounds like it. There is a degree of crystallization and distillation here that brings both the communal flow and the singularity of individual contributions to the fore. This relationship is sometimes disruptive but first and foremost it seems like a magnanimous display of collectiveness that celebrates each and every individual moment. Not so much teaching us but inviting us to become a witness to the process and dialectics of creating and partnering something together in such a way that the sum is always more than the single parts. And you are a part in the play of that game and you feel that there are no mistakes, just warm blankets of participative joy. It is more than music, it is Monika Werkstatt.
Markus Mueller / Bureau Mueller


about Monika Werkstatt
Communities and alliances are the right antidotes to the reactionary tendency towards isolation that characterises our time. When we’re among like-minded people, pressurealleviates, sincere exchange takes place, and we stimulate each other. For this reason, Gudrun Gut rounded up female musicians and producers from the entourage of her label, Monika Enterprise and Moabit Music. This project is called Monika Werkstatt.
Their collective motto is: »Live and Work / Dream and Make an Impact«.
AMBIENT SESSION is an Edit from 2x 4 hours electronic improvisation on 2 days at the res.o.nant light installation by Mischa Kuball at the Jewish Museum Berlin.